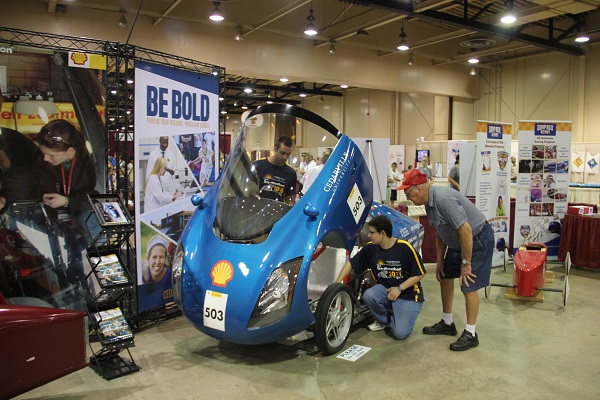 Cedarville University’s supermileage cars and robotics team have made an impression at national competitions. But now they’re impressing at the grandstand.

The Ohio State Fair wrapped up August 6, but not before Cedarville’s student-engineers scored Best Technology Exhibit for both the supermileage car and robotics displays. The Ohio Technology and Engineering Educators Association awarded the trophies to both teams.

This was the second honor for the supermileage team, which also earned a People’s Choice Award for Technology Education on July 28.

“We wanted to showcase Cedarville University's engineering program and the success we have had with our competitions in a new venue — the Ohio State Fair,” said Dr. Larry Zavodney, senior professor of mechanical engineering and the supermileage team adviser.

“Dick Dieffenderfer, director of the Technology and Engineering Showcase in the Lausche Youth Building, told our students he would like to see them come back next year,” Zavodney added. “The display got a lot of positive attraction and response. We talked to probably 70-plus families on August 5.”

“Four of our team members were able to share their experiences and demonstrate the functioning robot to young and old fair goers,” noted Clint Kohl, professor of computer engineering and team adviser. “Many were excited and impressed with how capable and sophisticated the Cedarville robot was. It was also a great opportunity to make Cedarville University more recognized.”

Cedarville student-engineers designed and built Urbie, Gold Lightening II and Sting, cars not known for speed but ultra-high energy efficiency. The supermileage cars are designed for traveling hundreds, or even more than a thousand miles, per gallon. The Cedarville robot is designed to complete a unique task while navigating a maze-like track as quickly as possible, without human assistance via remote control.