Model U.N. Team On Top of the World After Dayton Competition 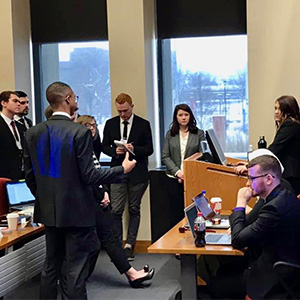 The team, advised by Dr. Glen Duerr, associate professor of international studies, will now prepare for the National Model United Nations competition in New York City, April 13-18. The event will take place at the Sheraton New York Times Square and the New York Hilton Midtown hotels, and the closing ceremony will be held at the U.N. General Assembly. Cedarville’s team will represent Kazakhstan in the national competition.

"We are so pleased with the hard work the team put into preparation and the way in which they represented Cedarville and the gospel of Christ."

“Overall, we were very impressed with the team's performance,” said Jackson. “Our practice event, a one-day simulation at Wright State University, was canceled due to inclement weather. As a result, DAYMUNC was the team's trial by fire, and our delegates came out on top. We are so pleased with the hard work the team put into preparation and the way in which they represented Cedarville and the gospel of Christ."