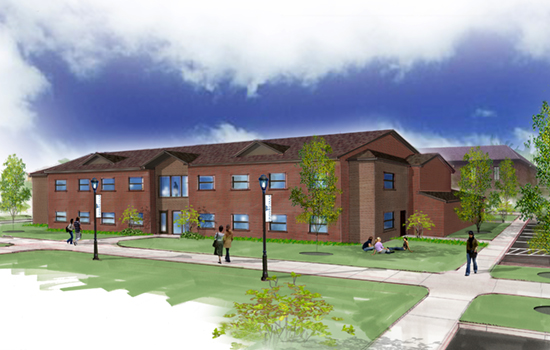 Monday, October 10, 2016
A new financial aid program and residence hall were announced after the Board of Trustees’ regular meeting September 29. Both initiatives are expected to improve student life and college affordability.

The Trustees approved the recommendation from Cedarville University’s administration that will increase scholarships and provide more need-based aid for new freshmen and transfer students.

The new program will increase academic scholarships by $1,000, establish a competitive $20,000 President’s Society Fellows Scholarship to recognize academic excellence and godly character, engage donors to provide an additional scholarship for all Pell Grant recipients, and introduce guaranteed scholarships for students who do not receive other merit aid. These changes are designed to make Cedarville’s distinctively Christian educational experience accessible to more students.

The Board also approved the naming of Jenkins Hall, a new dormitory slated to open in the Fall 2017 term. The $3.3 million residence hall will be a 64-bed facility located near the university’s townhouses along the eastern edge of campus. Four 16-person units will provide students with the best living-learning and discipleship environment. The new residence will replace Faith Hall, a 58-year-old former Army barracks that will be razed at the conclusion of the 2016-17 academic year.

The facility is named after Eleanor (Ellie) Sommerfeld Jenkins, the wife of Board of Trustee Warren Jenkins, who passed away in 2015. Warren is president and owner of Jenkins Restorations in Purcellville, Virginia. Jenkins Hall is completely paid for by donor and capital funds.

As part of the 2016 homecoming activities, the renovated Jeremiah Chapel was dedicated. The $3 million project took three months to complete and included updated and increased theatre-style seating, new customized sound system and lighting, new projection screens, and paint and carpeting. The largest number of donors to one campaign in the school’s history, over 2,100, joined together to fund the renovation and expansion. President Thomas White remarked that “chapel remains the heartbeat of Cedarville University and the support of this many people indicates that it always has been.”

The university also introduced The President’s Society, a new giving program for alumni and friends that is designed to provide scholarships to future Cedarville University students. The President’s Society will invite young alumni to join the movement of paying it forward as they give back to the scholarships which helped them experience a Cedarville education. The new program has three levels: Young Alumni Circle, Membership Circle, and Leadership Circle.

The Young Alumni Circle has three giving levels ($250, $500, and $750) for recent alumni to give back to the university. The Membership Circle is for $1,000 annual donors, and the Leadership Circle focuses on donors who contribute a minimum of $10,000 annually. The benefits include the opportunity for discounts at the university bookstore, priority seating at special events on campus, an invitation to the Legacy Banquet, and periodic communication with the president.

The Board of Trustees approved the hiring of seven new faculty members.