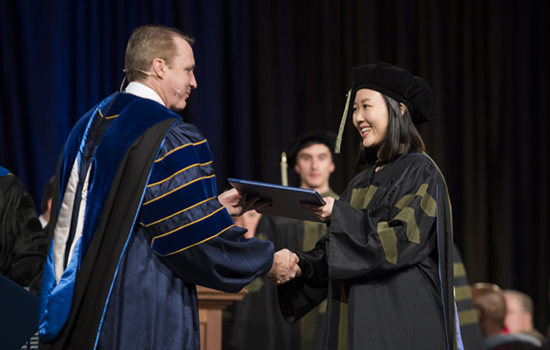 Saturday, May 6, 2017
A record-breaking 796 students received degrees during Cedarville University’s 121st commencement on May 6. The largest graduating class in Cedarville’s history, comprised of 703 undergraduate students and 93 graduate students, represented every academic department and had students from 42 states and 15 countries.

While graduation is the beginning of many students’ career aspirations, it also represented the close to two inspiring journeys. The first journey started 21 years ago in Massachusetts, and the other started after an earthquake in Japan.

The most emotional part in the historic ceremony was when Tara Winter received her degree from university president Dr. Thomas White. After a brief exchange of words and a hug, the 6,000 people in attendance applauded Winter for her perseverance.

Winter received a degree in sociology after taking classes since 1996—21 years.  After a series of life-changing events, Winter attended school one class at a time while caring for her family. When her family moved to Springfield, Ohio, she started a job as Cedarville University’s licensure, testing and accreditation coordinator in the school of education. Now 21 years, three children, and two different majors later, Winter finally saw the fruit of her labor when she received her degree from Cedarville president Thomas White.

Jeremiah Pennington’s journey began after a 2011 earthquake and tsunami devastated Japan, where he served as a responder in the U.S. Navy. Convicted to follow Christ and make an impact on children, Pennington enrolled at Cedarville University as a special education major. Through a full load of coursework, a full-time job and a full house of four sons, Pennington completed his degree and accepted a position as an intervention specialist at Fairmont High School in Kettering, Ohio, next year.

Two students received the highest awards given to members of the graduating class when they were presented the President’s Award. Matthew Cumberland of Renfrew, Pennsylvania, and Chandra Swiech of Jenison, Michigan received the honor near the conclusion of the ceremony.

The award is presented to two individuals who excelled in academics, leadership, service, and Christian character.

Cumberland majored in biblical studies with a minor in Greek. He served in the discipleship ministry and took a global outreach missions trip to Costa Rica. He plans to attend Dallas Theological Seminary. Swiech majored in biology with minors in Bible, Spanish, and chemistry.   She plans on pursuing medical school or Physician Assistant studies in 2018.

The following students received the Faculty Scholarship trophy for achieving a 4.0 grade point average during their years at Cedarville: