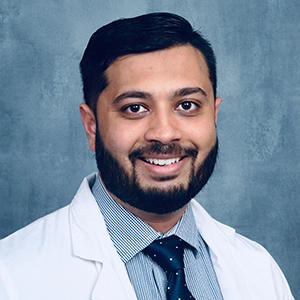 Ankit Pandav served the United States at home and in Afghanistan. Now, Pandav, a 2019 Cedarville University graduate, is serving his fellow veterans at the Dayton, Ohio, Veteran Affairs (VA) Medical Center, where he just completed a residency.

He will begin his career as an outpatient pharmacist on November 15.

Pandav’s military journey began when he joined the Ohio Army National Guard in 2009.

“I always had a passion to serve,” Pandav said. “Even when I was a little kid, I used to play army with my friends.”

“I always had a passion to serve. Even when I was a little kid, I used to play army with my friends.”

After completing basic training, Pandav became a field artillery tactical data system specialist. In 2011, he was deployed to Afghanistan as part of the security forces in support of Operation Enduring Freedom. He returned home in 2012 and continued to serve in the guard until 2015.

After leaving the guard, Pandav began to consider his next steps, which took him to Cedarville. As a kid, Ankit knew he wanted to be a pharmacist. And Cedarville offered a strong Doctor of Pharmacy program in a rich Christian environment.

“I felt that I needed some structure in my life, and I definitely knew I needed more God in my life,” Pandav said. “It was an easy decision.”

Pandav was especially impacted by the school of pharmacy’s focus on research and its requirement that professional pharmacy students be involved in student organizations every year, both of which set Cedarville students apart, he said.

But Pandav didn’t just participate in student organizations. He co-founded Cedarville’s chapter of the Student National Pharmaceutical Association (SNPhA), an organization that focuses on underserved populations. As president of SNPhA, he started and chaired a committee to reach out to and serve community veterans, offering screenings for blood pressure, diabetes, and cholesterol.

“As a student, Ankit wanted to help make a difference by loving others as a pharmacist and a veteran,” Chen said. “I’m proud of his hard work, resilience, and heart for others.”

Now, both Pandav’s military experience and pharmacy education have uniquely come together to prepare him for his VA role.

“I feel at home around veterans,” Pandav said. “I can connect with a population that is somewhat underserved and make them feel comfortable.”

Located in southwest Ohio, Cedarville University is an accredited, Christ-centered, Baptist institution with an enrollment of 4,715 undergraduate, graduate and online students in more than 150 areas of study. Founded in 1887, Cedarville is one of the largest private universities in Ohio, recognized nationally for its authentic Christian community, rigorous academic programs, including the Doctor of Pharmacy program, strong graduation and retention rates, accredited professional and health science offerings and high student engagement ranking. For more information about the University, visit cedarville.edu.