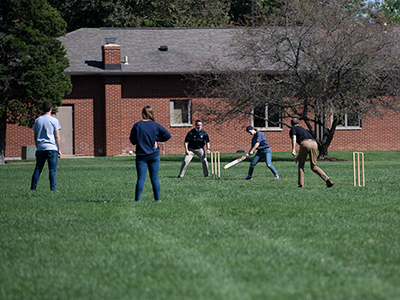 Bracketed by cornfields and Cedar Lake, Dr. Glen Duerr expertly bowled the cricket ball in his annual Cedarville cricket match. But there was an important history lesson between the wickets.

Duerr, associate professor of international studies, was born in Kent, England, then moved with his family to Canada, and is now working in the United States. He teaches cricket as a part of his History and Politics of the British Isles and Canada course.

“Cricket is deeply rooted in the tradition of the British empire. Many officers in the military played cricket because it is very tactical."

“Cricket is deeply rooted in the tradition of the British empire. Many officers in the military played cricket because it is very tactical,” said Duerr. “And it has the added bonus of being fun for students.”

Cricket involves two pitches with a wicket (wooden legs with bails balanced on top) at either end. The “pitcher” bowls the cricket ball toward the wickets in an attempt to knock the wooden bails off the stilts. The batter attempts to protect the wickets with a flattened and elongated bat, and scores by running between the two wickets. With the ability to hit the cricket ball 360 degrees, the fielding team must be strategic in order to catch the ball in the air.

This was Duerr’s sixth time teaching cricket to students on campus, an experience that reminds him of his school years.

“I grew up playing cricket in school,” said Duerr. “Oftentimes we would play cricket against schools founded in the 17th century. Cricket is deeply traditional and a cultural staple in England, and I still try to follow the sport whenever I can.”

As a part of the event, Duerr lectured on the history of cricket in the British empire, which included everything from the sport’s roots as a commoner’s game to its acceptance by the military to the popularity of cricket in the United States prior to the Revolutionary War.

“Cricket was at one time the most popular American sport!” said Duerr. “Once America separated from England, cricket gradually made the transition to baseball, which is a very American sport. The two are incredibly similar, and you can still see the influence of cricket.”

Duerr described his childhood in England as “filled with history," everything from the Charles Dickens festival Rochester, England, to Easter egg hunts at Leeds Castle in Kent, England, built in 1119. Duerr also lived in Canada for a decade prior to pursuing his doctorate in the States. With a culturally diverse background, Duerr’s course gives students the opportunity to experience cricket matches in the cornfields.

Located in southwest Ohio, Cedarville University is an accredited, Christ-centered, Baptist institution with an enrollment of 4,750 undergraduate, graduate and online students in more than 150 areas of study. Founded in 1887, Cedarville is recognized nationally for its authentic Christian community, rigorous academic programs, including the Bachelor of Arts in international studies program, strong graduation and retention rates, accredited professional and health science offerings and high student engagement ranking. For more information about the University, visit www.cedarville.edu.