Residence Directors’ Kids Back Where They Started 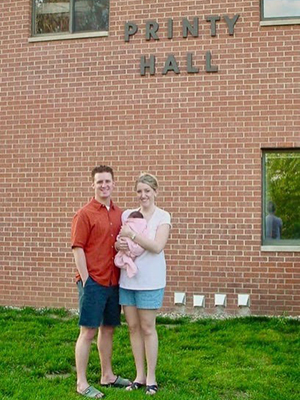 Cedarville University’s Getting Started Weekend always begins with student-leaders cheering for families as they shake signs with one key phrase: “Welcome Home.” While this phrase applies to all of Cedarville’s students, some have a special connection to the university that truly makes this place just that — home.

Four freshmen in the class of 2025 are no strangers to university living. In fact, their parents served as residence directors (RD) nearly two decades ago, meaning that the first time these students were on campus they were in strollers and swaddles. Now, they’re back, and ready to make their 1,000 days of college life their own.

“Even though I don’t remember living in the residence halls, my parents talk about it so much that I feel the connection. That is partly why I wanted to live in Printy as a Cedarville student because I know this is where my roots are." 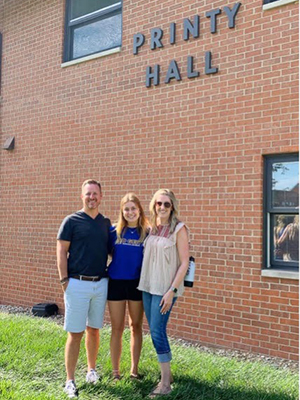 Harris, whose father served as an RD from 2000-2005 in Lawlor, St. Clair and Brock halls, and then in fundraising from 2011-2017, recalls residence life the first time around.

“I was brought home from the hospital to St. Clair and moved out of Brock when I was 3,” she shared. “I remember hanging out with the college guys in the lounge, potluck dinners with the other RD families, running around the dorm and flipping the lights on and off.”

She now lives in Printy Hall, feeling “happy to be in an amazing community of believers.”

"I really do feel like I am home, and I am looking forward to meeting lifelong friends, developing my faith, and making unforgettable memories.”

“Even though I don’t remember living in the residence halls, my parents talk about it so much that I feel the connection,” Atwell said. “That is partly why I wanted to live in Printy as a Cedarville student because I know this is where my roots are. I really do feel like I am home, and I am looking forward to meeting lifelong friends, developing my faith, and making unforgettable memories.”

Basner, whose father Jon served as a resident director for Lawlor Hall from 2001-2003, currently lives in Willetts Hall. Her father passed away from cancer in July 2009 when she was nine days shy of turning 7, but because of his history at Cedarville, returning to the university has been a source of comfort and connection for her.

“I don't remember much about him,” Basner explained. “Here at Cedarville, I want to ask people who knew my dad what he was like and listen to all the stories they have to share. I think this will help me feel closer to my dad and help me know who he was as a person and a child of the king.”

Isaacs currently lives in Brock Hall, where his father, Paul, served as residence director from 1999-2003. Though he has no specific residence hall memories, he is still excited to be back on campus as an undergraduate student and athlete.

“I chose Cedarville for soccer and because it was a place that my parents love,” he explained. “I am a lot like my parents, so I thought I could find the same joy here as they did. I’m looking forward to making more friends, playing soccer with the team, and growing in my faith and relationship with God.”