For the new resident director (RD) of Lawlor Hall, Andrew McKay, working at Cedarville University is a family affair.

Andrew’s sister, Alexis McKay, who served as the resident director of Murphy Hall and the townhouses last year, is now working directly with her brother as RD of Lawlor’s sister dorm, Printy Hall.

For the first time in Cedarville University's history, a brother and sister are working together to foster a closer relationship between bro-sis residence halls. 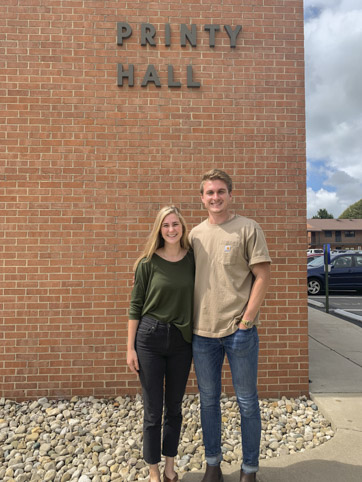 “This is a unique opportunity to work alongside a family member,” said Alexis. “Lawlor and Printy already have such a close relationship, and working with Andrew this semester will only make them closer.”

Lawlor and Printy, both traditionally freshman residence halls, have a history of shared events and a close bond. This August was Andrew’s first time organizing the annual “Lawlor-palooza,” an event that pits units of Lawlor against each other in choreographed dances and minute-to-win it games.

“It was exciting to be a part of such a longstanding tradition,” said Andrew. “The responsibility of organizing a much-loved campus event like this was made easier by having Alexis help.”

Andrew was able to return the favor during Printy Hall’s 20th-anniversary celebration of “Printy Wars.”

“I was so excited to serve in a way that fosters meaningful relationships between both my residents and their brother units in Lawlor,” said Alexis. “Andrew and I work so well together so his help while planning this event was invaluable.”

While adjusting to their new roles at Cedarville, the unique experience of working with a sibling is one that Andrew and Alexis are grateful for.

“I never would have expected that we would be working closely like this, but it is ideal,” said Alexis. “Andrew is so equipped for this job, and I have full confidence in him. I am thrilled to come into this year working with someone I know so well!”

“It is a new job, and one with a lot of responsibility. Lawlor has 200-plus students that I am in charge of, so it is great to have Alexis right next door,” said Andrew. “She is my go-to person and the first text I send whenever I have any questions.”

For Alexis, accepting the resident director position in 2021 seemed like a perfect fit.

“I was an RA in college and had a wonderful RD. I always had an idea in the back of my mind that I may be interested in going into full-time ministry, and working as an RD is such a unique opportunity to live alongside the people you are discipling.”

For Andrew, the job came as a surprise. After starting college as an athletic training major and then switching into IT management, he finally settled on Christian education in his sophomore year.

“It was the contagious atmosphere at Cedarville that made me think about going into ministry full time. In the few months I have been in this job I have been stretched and challenged, but I have loved the discipleship opportunity I have while working with these guys.”

Alexis and Andrew are not the only McKays on campus. Their father, Dr. John McKay, assistant professor of biblical theology, is a familiar face to most students. His wife, Lee-Ann, previously worked as an administrative assistant in the history and government department, and their youngest daughter, Katherynn McKay, is a 2022 Cedarville graduate.

For Alexis and Andrew, accepting jobs at Cedarville felt like coming home.

“We moved a lot as kids — I was actually born in Canada, then moved to Michigan, then Indiana, then Texas and finally to Cedarville about four years ago,” said Alexis. “In the past few years Cedarville has started to feel like home, and it is so much fun to have settled in the same place as my family and work this closely with my brother.”

With upcoming events, including the annual gridiron competition between Printy Hall and Maddox Hall and Campus Christmas, Alexis hopes that the close relationship between her and Andrew reflects in the community between the two residence halls.

“I became an RD because I love serving in a way that fosters meaningful relationships,” said Alexis. “Working with Andrew and having him as support, both in events and the day-to-day, is so helpful in cultivating an even closer relationship between our two halls.”