"My Mind is Not Broken" 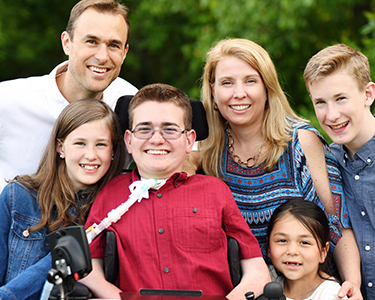 Evan Weise may be different from other students because of his spinal muscular atrophy (SMARD), but his ability to experience college academics and life remains unaffected by his condition.

With a large part of his body paralyzed, forcing him to depend on a wheelchair to navigate Cedarville University’s campus, and a ventilator to breathe, Weise, a freshman from Hilliard, Ohio, remains undeterred by his condition. He tackles each class with an inquisitive nature and a passion to learn, just like every other college student.

“It is clear that Evan works unto the Lord and is a great example of Colossians 3:23.”

Weise has adjusted to life as a Cedarville University political science student well and oftentimes tells people, “I feel pretty much normal.”

Weise’s ability to thrive in academics is not hindered by his condition. “Evan is such a joy to have in class,” said Dr. Glen Duerr, associate professor of international studies. “His insights are incisive, and it is clear that he has spent time researching the material in my class, global Issues, discussing the most recent advances in warfare, diplomatic relations between countries and how followers of Christ can winsomely share the gospel in the midst of a globalized world.

“It is clear that Evan works unto the Lord and is a great example of Colossians 3:23.”

Due to arm paralysis, Weise cannot type the same as other students, but dictation and voice-to-text features on his iPad allow him to keep up with his assignments.

Weise added, “I cannot use my body the same way everyone else can, but my mind is not broken. I study hard and have made good friends. College is the same for me as everyone else. I can keep up just fine.”

There are still challenges to overcome, but Weise’s parents have worked hard to make college accessible. “My parents have been driving me to campus every day,” he said. “They stay with me while I’m here. They know how to care for me the best, and that’s been huge for me.”

As with most SMARD infants, Weise was born with no complications. It wasn’t until he was 3 months old that his doctors noticed he had difficulty breathing. According to Jaxson Laboratory, there are approximately 1,000 known cases of SMARD worldwide, making it one of the rarest genetic conditions.

“What went from a normal doctor’s visit turned into three months in the hospital,” said Weise. “They couldn’t figure it out. I had surgeries to stabilize my organs, but we just didn’t know. We were in the hospital for a long time.”

Eventually, doctors discovered the source of his physical problems and they sat down with his parents to share the incurable diagnosis with uncertain life expectancy.

“Nobody knew what it was,” Weise said. “At the time I was diagnosed with it, there were only 30 people worldwide who had it. We had to send my bloodwork to Germany to figure it out.”

“It got a little worse as time went on, but not since I was 13 or so.” he continued. “Sure, there are some things I can’t do anymore, like have the strength to sit myself up in bed. Overall, it has not progressed nearly as fast as when we first found it.”

Weise praises God for his faithfulness throughout his life. “God has always protected me,” he offered. “At one point, doctors told me that I had no white blood cells and that it was a miracle I was alive. I’ve never gotten COVID either. For someone like me to not get sick is incredible.”

Weise’s journey has given him a passion for others with SMARD, as he is now participating in a study with Nationwide Children’s Hospital in Columbus, Ohio, seeking to better understand the condition so that measures can be put in place for those struggling with it.

“I feel a deep purpose in the world,” Weise said. “Being in this condition has forced me to rely on God more. A lot of the impact I have made on others is only because I have SMARD. I don’t think I could ever give that up.”

Located in southwest Ohio, Cedarville University is an accredited, Christ-centered, Baptist institution with an enrollment of 4,715 undergraduate, graduate, and online students in more than 150 areas of study. Founded in 1887, Cedarville is one of the largest private universities in Ohio, recognized nationally for its authentic Christian community, rigorous academic programs, including the Bachelor of Arts in political science, strong graduation and retention rates, accredited professional and health science offerings, and high student engagement ranking. For more information about the University, visit cedarville.edu.