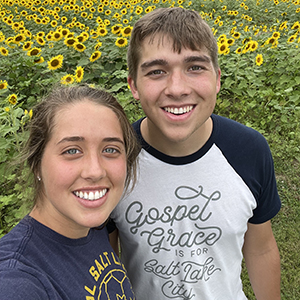 When fellow students at Cedarville University asked newly enrolled Anna Grace Galkin where she was from, she hesitated. This was because the longest she had called any place home was approximately four months.

As the daughter of an itinerant preacher who led the self-run Galkin Evangelistic Ministries, Anna Grace’s family traveled around the United States, sharing the gospel and encouraging local congregations.

“My parents wanted to use their gifts – my dad is able to connect well with people through speaking, and my mom was a violin performance major – to fulfill their goal of seeing individuals come to the Lord and equipping the local church to do the work of ministry,” Anna Grace, a junior English major, explained.

I had to be intentional with my questions, which is a drive the Lord has given me because of my background. I feel like I’m able to talk meaningfully with anybody about anything.”

Coming alongside and bolstering a congregation’s existing ministries characterized the Galkins’ ministry model. The family would typically travel to a new church each week and plug into their discipleship programs. Anna Grace’s father, Will, would preach every night, and the family would play several songs during the service. Then, they would invite the surrounding community to an Irish music performance on Friday nights.

The family’s lifestyle led to Anna Grace, the oldest child, being brought up in distinctive living conditions. “When I was about 9 years old, we purchased our last and biggest trailer, a 53-foot trailer pulled by a semi-truck,” she shared. “The three girls lived in the back room while the two boys shared another room. All of us juggled one toilet and two showers.”

“We were homeschooled,” Anna Grace said, ”so our life was very simple in that it was very scheduled for us – we didn’t have much time to dilly-dally. We tried to get schoolwork done as quickly as possible while traveling.”

“We had to hold all our possessions with open hands,” Anna Grace continued. “If we forgot to make something travel-safe, we’d unpack and find it broken. Or sometimes we’d plugin and there would be an electrical short, and we’d fry all our appliances. I remember my dad spending hours one week installing a new dishwasher.”

Though Anna Grace remains grateful for her immersion in the gospel message, she notes that she had to consciously own her faith. “I heard the gospel every single night of my life,” she said, “but though it was the air I breathed, it took a while for it to permeate my own life in a real way.

“After going through an inward-focused phase of despondency in middle school, my dad telling me that I needed to be in the Word was a game-changer,” she said. “I made a biography of God using the Psalms, then prayed them back to God, and that was when I began to understand that salvation was not about me; it’s about what God does despite me.”

William, the family’s second-oldest and a freshman history major at Cedarville, echoes Anna Grace’s testimony. “Hearing the gospel every night, I felt like I asked Jesus into my heart many times before I understood the gospel. Making it my own happened around 15 when I was dealing with major gaps in my understanding of the gospel.”

Their upbringing affects their life now, as they find it challenging to form long-term friendships.

“Because I didn’t have many friends my age growing up, relating to people my age is still a struggle, especially transitioning to a place where I’m expected to know social norms,” William said.

Anna Grace reiterates this tension. “Coming to Cedarville, I didn’t really know how to make relationships for more than a week, especially with peers. I learned God values the faithful friendships that last a long time.”

However, the intentionality needed to be an effective witness on a short-term basis positively impacts their friendships. “I knew I had to be relational while on the road because I only had five or seven days to make a worthwhile relationship with somebody,” Anna Grace shared. “Each night, I had to be intentional with my questions, which is a drive the Lord has given me because of my background. I feel like I’m able to talk meaningfully with anybody about anything.”

Anna Grace concludes with her gratefulness for both her upbringing and her place at Cedarville. “It was so fun to be on the front lines of ministry. The Lord let us deal with souls coming to Christ multiple times a week, and showed us, years later, those same people transformed and integrated into a body of believers. Now, I’m learning that all of life is a gift, and loving who the Lord has placed me with through late-night conversations holds as much value in the Lord’s eyes. That’s his will for me now.”

Located in southwest Ohio, Cedarville University is an accredited, Christ-centered, Baptist institution with an enrollment of 4,715 undergraduate, graduate, and online students in more than 150 areas of study. Founded in 1887, Cedarville is one of the largest private universities in Ohio, recognized nationally for its authentic Christian community, rigorous academic programs, including its Department of English, Literature, and Modern Languages and its Department of History and Government, strong graduation and retention rates, accredited professional and health science offerings, and high student engagement ranking. For more information about the University, visit cedarville.edu.