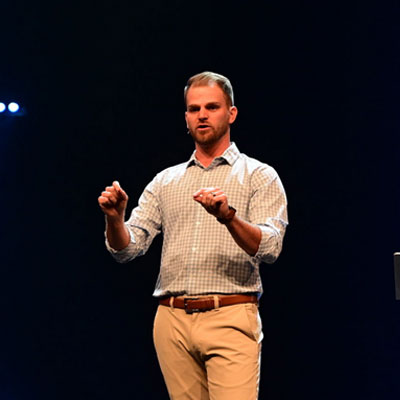 "He believes that as Christians they have a higher calling than to sell homes..."

Danny Baron has been selected as the Young Alumnus of the Year.

Danny graduated from Cedarville University in 2014 with bachelor’s degrees in both Business Management and Marketing. During his time as a student, Danny was a member of the Junior Varsity basketball team, rising to the honor of team captain. He traveled with the Athletes in Action basketball team on a missions trip to Columbia in 2011. He participated in campus life as part of the Integrated Business Core (IBC) and as an intramural sports specialist and referee.

Danny shares that General Loren Reno’s leadership class had a tremendous impact on his life. That class improved his public speaking abilities and provided him with leadership principles that drive his business practices today.

Following graduation, Danny began his career as a consultant in the Market Research Industry, then moved into sales for custom homes. In 2018, Danny received his real estate license and started as an individual realtor.

During his time as a realtor, Danny has distinguished himself as someone who acts with integrity and character and seeks to serve his clients well through consistent and effective communication. In 2019, he was honored by Keller Williams as Rookie of the Year. The Cincinnati Area Board of Realtors has recognized him in its Circle Excellence three times as one of the top 10% producing realtors in the Cincinnati area. He has received the Ohio President’s sales club award three times and has sold over $100 Million in real estate over the last 4 years.

As a realtor, Danny has built and currently leads a real estate team of 15 individuals called “The Baron Group.” “The Baron Group” has been recognized as the #1 Real Estate Team in Cincinnati, Ohio, and is on pace to sell 200 homes this year.

Danny’s goal with his team is to create a culture of service. He wants to empower his agents to look and be different in the marketplace. He believes that as Christians they have a higher calling than to sell homes — he wants to genuinely uplift the community and serve his clients well.

The Baron Group is well known for hosting large appreciation events for its clients, like Cincinnati Reds games and ice skating at Fountain Square. That kind of generosity is so Danny!

Outside of real estate, Danny has been active in his local church, serving at Grace Baptist Church in Mason, Ohio, as a worship leader and young adult group leader. He is passionate about reaching others for Christ and has traveled with the Grace Missions Team to Tanzania three times.

Danny and his wife, Jena, were married in September of 2021.

Chip Bernhard: 2022 Alumnus of the Year 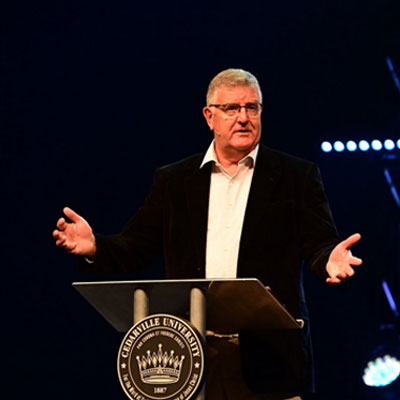 "He also participated in campus organizations such as Swordbearers and served his classmates as a Resident Assistant and Freshman Class President."

Chip Bernhard has been selected as Cedarville University’s 2022 Alumnus of the Year.

Pastor "Chip" Bernhard graduated from then Cedarville College in 1977 with a Bachelor of Arts degree in Bible. During his time as a student, he traveled with the Athletes for Christ basketball team to the Philippines in the summers of 1974 and 1975. He also participated in campus organizations such as Swordbearers and served his classmates as a Resident Assistant and Freshman Class President. Faculty members of Cedarville College helped shape the theological foundation for his life, specifically Dr. Callan, Dr. Greer, Dr. Monroe, and Dr. Gromacki.

Following graduation from Cedarville, Chip earned a Master of Divinity degree from Grand Rapids Baptist Seminary in 1980 and began his pastoral ministry at the Shawnee Baptist Church in Shamong, New Jersey, where he was ordained. 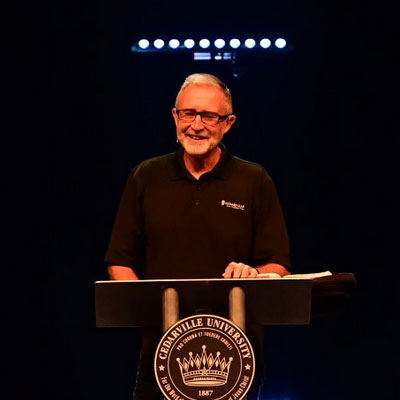 "By his example of a strong work ethic, student-workers leave with the understanding of how any work can be a service to the Lord."

Walk around Cedarville’s campus and you’ll see Paul Ware’s handiwork almost everywhere you look. From well-manicured flower beds to healthy trees and shrubs, you’ll see evidence of Paul’s green thumb. If it has roots and grows in the ground, Paul probably designed, planted, or cared for it. He’s worked hard to ensure Cedarville’s guests have a good first impression as they drive onto campus.

Paul came to then-Cedarville College in October of 1977 as the Landscape Maintenance supervisor. Over the past 45 years, Paul has served faithfully in various areas within the Grounds department. His current position is Landscape Planner, which he has held since 2006. Throughout his years here, Paul has always been willing to work wherever and do whatever he was asked to do to the best of his abilities. Of his work at Cedarville University, Paul shares “I want to make the University look good and make the Lord look good. I want people to come back to our campus.”

After 45 years Paul is still known for his dedication, excellence, consistent work, desire to learn, and his willingness to serve others. He is equally known for his encouragement and mentoring of student workers. By his example of a strong work ethic, student-workers leave with the understanding of how any work can be a service to the Lord.

Paul and his wife, Marilyn, have been involved for many years in the University’s premarital counseling program, Fit to be Tied. One young man mentioned that he was thankful to have worked with & been mentored by Paul. He said he learned a lot about landscaping as they worked side by side, but he was most thankful for the things he learned about life & marriage. Paul and Marilyn have been married for 52 years. They have 4 grown children and 9 grandchildren. Paul loves his family and enjoys spending time with them.

Paul is an active member at Grace Baptist Church, Cedarville. Every Sunday morning you’ll find Paul greeting all who come through his door at Grace with a warm handshake & smile.

In his free time Paul enjoys gardening, biking, painting, and traveling. Encouraging missionaries is also something he enjoys doing and it’s with great joy that they’ve been able to travel to visit and encourage their daughter and her family on the mission field.