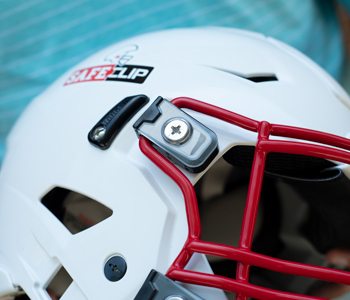 Big hits are a well-known facet of football, but two dreamers tinkering in a garage are on the verge of making a game-changing impact on one of America’s favorite sports.

Rich Williams, a 2011 alumnus of Cedarville University, and his friend and business partner, Justin Summerville, have created the S.A.F.E. (Shock Absorbing Football Equipment) Clip, which attaches the facemask to a football helmet in a revolutionary way.

“A lot of the emphasis recently in making football safer has focused on the bonnet, which is the most prominent part of the helmet, the hard shell that goes around the head,” noted Williams. “But 70% of the hits in football contact the facemask.”

“This mitigating of the G-forces could be a game-changer when it comes to reducing the possibility of head injuries.”

From watching football on TV and in person, Summerville wondered if the problem was being approached in the right way. What if the helmet was adapted somehow to absorb some portion of the G-forces that often contribute to concussions and head injuries.

“Justin thought, ‘Football shouldn’t be this dangerous,” Williams said. “What if we could make the mask attachments something like the crumple zone of a car, where the bumper absorbs a lot of the impact of a crash. But in this case, the material returns to its original position.”

Williams and Summerville came up with a clip that attaches securely to the helmet, holding the facemask snug to the helmet while allowing a slight amount of give on impact. Inside Summerville and Williams’ clip is a small cube of rubberized plastic, called Sorbothane, that absorbs and abates the G-forces from helmet-on-helmet contact and allows the facemask to reset to its normal position.

In testing, helmets equipped with Williams and Summerville’s S.A.F.E. Clips were able to reduce G-forces by a minimum of 19% and a maximum of 35%. Testing was conducted at an independent laboratory following standards established by the National Operating Committee on Standards for Athletic Equipment for new helmets.

“This mitigating of the G-forces could be a game-changer when it comes to reducing the possibility of head injuries,” Williams noted.

The S.A.F.E. Clip retails at $29.99 for a set of two, which is the number required for holding many facemasks to the bonnet. So far, high school and youth football teams in Ohio, Michigan, Florida and North Dakota have purchased the clips for their helmets.

The S.A.F.E. Clip has had a number of prototypes before landing on the one currently for sale. Williams and Summerville have raised $700,000 in capital to develop and market their product. They have also secured three patents and manufactured more than 2,000 clips to date. Beyond football, the clip has potential application in other sports that use helmets, such as hockey, and they have been in touch with representatives from the National Hockey League.

To take the sales and acquisition of their impact-absorbing clip to the next level, Williams and Summerville will be part of Cedarville’s inaugural Entrepreneurship Accelerator program. The program seeks to connect business start-ups with expertise and funding sources to help them succeed.

The Entrepreneurship Accelerator is led by Dick Blanc, a 1982 Cedarville alumnus and former managing partner of Accenture, LLP, an international consulting company that helps businesses grow through innovative strategy and technology.

“We really want to see Cedarville become the recognized hub for faith-based entrepreneurship in the Midwest,” Blanc said. “We want startup companies like S.A.F.E. Clip to benefit from our seasoned Entrepreneurs-in-Residence with deep experience in angel investing, venture capital, serial entrepreneurship and venture law. The Entrepreneurship Accelerator is a way for them to be part of a disciplined process that will help them scale their business, develop healthy capital structures and provide opportunities to network with and pitch to investors.”

"We desire to scale startups with both significant business returns and significant impact aligned with our values.”

Participants in the accelerator, which is open to students from any major, faculty, staff and Cedarville alumni, will be able to pitch a business idea at a “shark tank” type event to be held next spring. In addition to benefitting from their engagement with established entrepreneurs, students are also able to earn college credit by participating in the accelerator.

“My interest in developing a small business was sparked when I was a student at Cedarville,” Williams noted. “Now, with the help of the Entrepreneurship Accelerator, Justin and I are trying to do something that will change football as we know it.”

Located in southwest Ohio, Cedarville University is an accredited, Christ-centered, Baptist institution with an enrollment of 4,193 undergraduate, graduate and online students in more than 150 areas of study. Founded in 1887, Cedarville is recognized nationally for its authentic Christian community, rigorous academic programs, including its master of business administration, master’s in business analytics, healthcare mba, master’s in cybersecurity, mba in innovation and entrepreneurship, pharmd/mba dual degree, mba in operations management and bachelor of science in economics programs, strong graduation and retention rates, accredited professional and health science offerings and high student engagement ranking. For more information about the University, visit www.cedarville.edu.