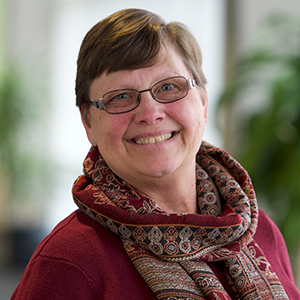 A retired professor who helped start the Cedarville University School of Pharmacy and her husband recently donated $10,000 to the school, supporting the school’s work of preparing the next generation of Christian pharmacists.

The school of pharmacy plans to use the donation to help cover the cost of a new high-performance liquid chromatography (HPLC) machine, which is used by students in various chemistry-related experiments.

Dr. Rebecca Gryka served as the chair of pharmaceutical sciences at the school of pharmacy from the school’s inception in 2010 until her retirement in 2018. She came with two doctorates – a Pharm.D. and a Ph.D. – and experience working both as a clinical pharmacist and as a professor, having served as an adjunct professor at the University of Southern California and a full-time professor at Loma Linda University.

“Cedarville intrigued me because it was a chance to really be a part of students’ lives, both academically and spiritually."

Gryka learned of Cedarville’s plans to open a school of pharmacy at a prayer breakfast for the 2009 American Association of Colleges of Pharmacy Annual Meeting.

“Cedarville intrigued me because it was a chance to really be a part of students’ lives, both academically and spiritually,” Gryka said.

“Because she was both a pharmacist and a Ph.D., she could really bridge the gap between the sciences and what we do in practice,” said Dr. Aleda Chen, associate dean of the school and associate professor of pharmacy practice.

Gryka produced and refined a lot of the school’s curriculum in its early years and worked as part of the school’s accreditation process. She also helped younger professors deal with student issues, exam writing, course planning, and more.

On the student side, Gryka taught classes and coordinated student research projects. She also headed up a research project that involved working with an outside company and the school of engineering and computer science to develop a new type of nasal cannula. Another project involved looking at how boiled green leafy vegetables may release vitamin K into the water, which can have implications for patients on blood thinners who need to monitor their consumption of vitamin K.

Gryka and her husband, John, retired in 2018 to be near their grandchildren. But though Gryka is retired, she isn’t entirely finished teaching – she is currently serving as an adjunct professor at Texas Southern University.

She and John came back to visit Cedarville in summer 2021, which is when they began to consider donating to the school.

“There was a lot of growth on my part as a leader, as a spiritual leader, and as a faculty member,” Gryka said. “I’m blessed by the years I had to serve there.”

And now, thanks to the support of the Grykas, Cedarville’s school of pharmacy can continue to offer the same experience to future generations of faculty and students.

Located in southwest Ohio, Cedarville University is an accredited, Christ-centered, Baptist institution with an enrollment of 4,715 undergraduate, graduate, and online students in more than 150 areas of study. Founded in 1887, Cedarville is one of the largest private universities in Ohio, recognized nationally for its authentic Christian community, rigorous academic programs, including the Doctor of Pharmacy program, strong graduation and retention rates, accredited professional and health science offerings, and high student engagement ranking. For more information about the University, visit cedarville.edu.