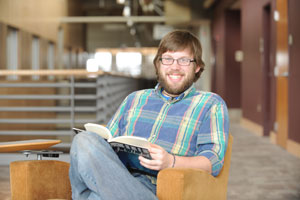 Senior Ed Dunning (Loveland, Ohio) knows exactly how many days until commencement. He will graduate with a double major in youth ministries and Christian education. Ed is the vice president of a sports management organization, section leader on the tuba in symphonic band, and a four-year member of the pep band. But the key idea of his story is simply this:

My first class was 8:00 a.m. biology. I took my dad's advice and sat toward the front so I'd pay attention, but I fell asleep in class. And from there it went downhill fast–I finished the semester with four Ds and a C.

I was mad. Furious, actually. How could this happen to me? I was a straight A student in high school near the top of my class. I arrived at Cedarville with head knowledge, but I didn't know how to write a paper or prepare a project. As a freshman, it was hard to tell my professors I had no idea what I was doing in their class.

I got a letter at the end of the term saying I was on academic probation and had to enroll in the MAP (managing academic progress) program. I began weekly meetings at The Cove with Becky Kuhn, coordinator of academic engagement. She helped me refine a game plan and held me accountable to it. She helped me identify my strengths and find areas where I could apply those in other areas. I needed to hear I was good at something; I wasn't hearing that from anyone else.

I learned how to manage my time, and I changed my major. Spring semester went much better, but my cumulative GPA was 1.87. I was still in the red zone, and my academic probation continued into the fall. Coming back to campus as a sophomore, my whole outlook had changed. I had a group of friends, classes in my major, and a lot more confidence that I had the tools I needed to beat this monster. Academic probation turned out to be a blessing in disguise. Without that intervention my freshman year, I would not have stayed at Cedarville.

By my junior year, I was completely off academic probation, but I have stayed in touch with The Cove these last two years. I stop by several times a week to say hi or share a prayer request or praise. I know they care about me, I know they pray for me.

I'm just a few weeks from graduation, but I'm not as stressed as I thought I would be. It meant a lot to have people at Cedarville who listened to me. They were behind me, pushing me to excel. Even though I know they're still behind me, I don't need them to push me down the track. I'm off and running on my own.

After graduation, Ed plans to work with Campus Crusade for Christ at Miami University in Oxford, Ohio. He's had offers to teach high school Bible in Peru, Mexico, and Germany, but he says,"I'm not ready to go overseas yet. Give me a year or two and I will be."