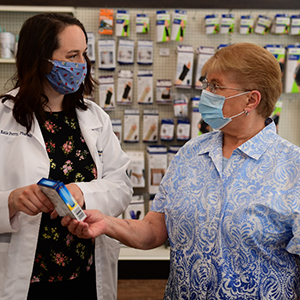 Cedarville was represented in its first HQIC appearance by four third-year Doctor of Pharmacy students: Abby Woodard of Camden, Ohio; Chrissy Capo of Galloway, New Jersey; Erin Ballentine of Walkersville, Maryland; and Rachael Tollerton of Evans City, Pennsylvania. They finished behind only the University of Southern California and Virginia Commonwealth University.

“We were so excited,” Woodard explained. “There were a lot of prestigious schools and to be ranked among them was really awesome for us.”

“COVID-19 and other recent events have made mental health issues more prevalent, and we can’t continue ignoring them."

For the competition, which is held annually by the Pharmacy Quality Alliance (PQA), Capo said that Cedarville’s team focused on the role of community pharmacies in addressing mental health.

“COVID-19 and other recent events have made mental health issues more prevalent, and we can’t continue ignoring them,” Woodard explained. Focusing on the needs of Greene County, where Cedarville is located, she said they “found that anxiety and depression are really underdiagnosed and undertreated.”

The team proposed setting up tablets with two forms for patients to fill out when picking up prescriptions. The first form, the PHQ-2, would identify signs of depression, and the second form, the GAD-2, signs of anxiety. The results would be uploaded to the pharmacy’s patient profile and, if needed, spark mental health conversations with a pharmacist.

“A lot of patients feel depressed or anxious, but do not realize that what they are feeling is not entirely normal and something they should address with their doctor,” Capo explained.

“We sought to leverage pharmacists — one of the most trusted healthcare providers —  to come alongside patients in their mental health journey and normalize mental health conversations,” Woodard said.

The students were encouraged to join the competition last September by the school of pharmacy’s Center for Pharmacy Innovation and by Dr. Katie Perry, who was a fellow in the school. For her fellowship, Perry also served as a pharmacist at Cedar Care Village Pharmacy and helped the students understand some of the costs and logistics of their hypothetical proposal. They submitted their proposal in January and learned they were finalists in March, presenting remotely to a panel of judges on April 16. Their presentation was recorded and played at the national PQA conference on May 13.

“This project required a step of faith for us, and we saw God’s faithfulness in every step,” Woodard said.

Cedarville faculty and staff advised the team as they prepared for the competition, with Woodard and Capo specifically mentioning Perry, Dr. Thaddeus Franz, Dr. Justin Cole, and Dr. Aleda Chen.

While the students demonstrated one of Cedarville’s core values, excellence in effort, they also showed Christlike love for others.

“Mental health is undertreated, and the number of ways it’s impacting society is heartbreaking,” Woodard said. “To get to be the voice that advocates for mental health and possibly implement this in a real pharmacy would be incredibly rewarding.”

Located in southwest Ohio, Cedarville University is an accredited, Christ-centered, Baptist institution with an enrollment of 4,550 undergraduate, graduate, and online students in more than 150 areas of study. Founded in 1887, Cedarville is one of the largest private universities in Ohio, recognized nationally for its authentic Christian community, rigorous academic programs, including the Doctor of Pharmacy program, strong graduation and retention rates, accredited professional and health science offerings, and high student engagement ranking. For more information about the University, visit cedarville.edu.